I have to be honest. I hate this.

I was planning on taking this time to do a lengthy, honest, and kind of geeky post about EMDR therapy.

I can’t write about that right now.

Why? Is it because I’m having a food hang-over? No (even though I am).

Is it because I’m currently binging on Netflix a show about tiny houses? No (even though I am).

It’s because I can’t go 30 minutes without having at least one moment where the madness in Charlottesville and the shmuck in the Whitehouse come up.

I could go on for a long time about what I believe.

I could talk about how I am currently working on ridding the anger that I have lived with for so long, and how that is messing with my ideas of not hating anyone or anything – trying to be empathetic when I can… I can only empathize with people to a certain point. Hating and hurting is well beyond that for me. 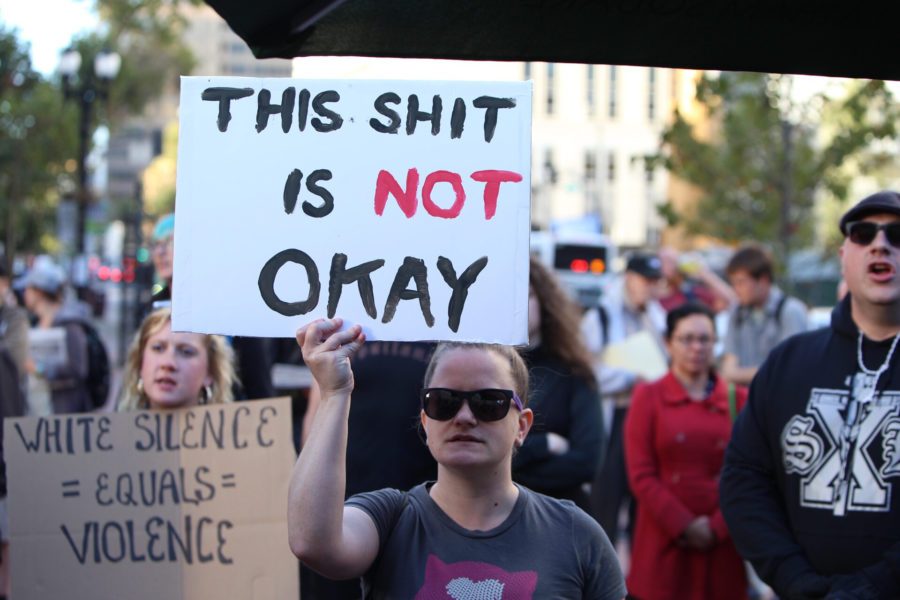 I could tell stories about growing up as an Israeli born Jewish kid and the things that still get said to me (jokes from Southpark, people using the word “kike”, and so on).

I could talk about my god-parents, and the fact that they are wonderful people who always made me a part of the family. Oh, and they’re African American – which caused some strange looks and other reactions when I would go out with my godfather.

I could talk about my family.

I could talk about my friends.

I could talk about what I think we need for social justice.

Can’t you just try, for a second, to pretend that you’re human like the rest of us and not a mutant lovechild of Auric Goldfinger, A Cheez Doodle, Humbert Humbert, and The Monopoly Guy?

This was your chance to prove that you’re not a completely a racist, xenophobic, sexist, megalomaniacal, wishy-washy bloomin’ idiot.

You just had to be yourself…”

I had My Lady assure me that she would fight if they came for me. She said she would hide me if she had to. I wanted to cry. I hate that she has to say that.

I hate that I have to think to myself that I would fight for my family and friends because they are not white (or orange), not Christian, not straight – not whatever.

I don’t want to fight anyone.

I don’t want to die in the streets fighting a war that THIS COUNTRY ALREADY FUCKING FOUGHT! I don’t want to have to fight for my family because people can’t see that the basic right to live should belong to EVERYONE!

I have so much I want to say about this, but I can’t find the right words.

Educate yourself and be aware. Educate others and help them. If you see someone who is being hurt, just help them!

I’m just going to leave all these here now.

Fuuuuuuuuuu….. I just wanted to write a post about EMDR and music…