Just kind of rolls off the tongue, doesn’t it?

So, what is Disjointed Folk?

Well, the long answer is that Disjointed Folk is how I describe not only the music & lyrics I write, but the stories that go with them, the characters that they involve, and – to a certain point – my point of view of all of the above. Disjointed Folk isn’t just a genre, it’s a mass collective; it’s a mindset & a way of life, it’s almost a path – a winding one to be sure. No, we’re no lost tribe of Israel, and I don’t even know who the We in this is… I can only speak for myself, but I can play music for all the displaced, discontent, disturbed, disowned, discarded, disconnected, discouraged, disenchanted, disparaged, and even the disjointed.

I suppose my genre includes ranting…

Disjointed Folk music became the name when I was first putting the songs together for The Storyteller’s Impasse. I was talking about getting the songs mastered by different people (as I’ve written about in other posts), a friend of mine – a folk musicians & songwriter – suggested that I rethink that idea. “The whole album might seem really… Disjointed.” She said.

In one word she had solved a few problems for me. I had no idea what to consider my genre of music, and I had no clue how to tie these songs together – they had all come from different parts of my mind, my life, and my interpretation of what had transpired. Thus, Disjointed Folk was truly born.

So, Disjointed Folk it is.

So, I give a call to these people: if you are an introvert who longs to travel all the quiet roads, if you are struggling with a mixture of wanderlust but hate to break away from routine, if you are uncomfortable in your own skin but loathe the idea of being anyone else, if you are discontent but have no real reason why, if your Storyteller has ruled you for too long & you are ready to revolt…

Get Disjointed, my friends. 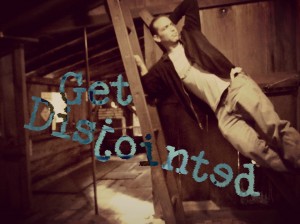